Colossus was a Rock & Soul Show Band that performed in Dallas/Fort Worth , Houston and Louisiana also touring in the Midwest and Northern USA. in the early 1970's. The band was formed when the Gentlemen then known as Angus split up.  The drummer, bass player and singer continued as Angus and the horn section along with the keyboardist  formed a new group Colossus named after the movie "Colossus, the Forbin Project".  Members were Steve Hunter - Hammond organ, piano & bass keys, James Miller - saxophone & flute, David Hughes - trumpet & rhythm guitar, Keith McElvain - trombone & trumpet, Gary Carpenter - lead singer, Tommy Beavers - drums and Freddy Cox - lead guitar & vocals. Later James Miller left the group and was replaced by Mike Campbell on Saxophone & flute. Tommy Beavers also left the group and was replaced by Chuck Corbett on drums. Steve Hunter left the group and was replaced by John (Rick) Siebman on Bass and Vocals.  ​After those changes the group added Gary  Coots (not pictured) on keyboard.

​David Hughes left the group in 1973 and Colossus continued after these two groups for a few years but no pictures or music  are available.

The later Colossus group
is pictured to the left.  Click to enlarge.

At left is a  picture of Keith McElvain at the driver's seat of the Colossus Bus circa 1973.  Keith was killed in a plane crash on January 20, 2020.  He was piloting his  small single engine plane doing aerial photography when he crashed.  Keith was also still playing trombone in multiple community bands near  Tyler, Tx. 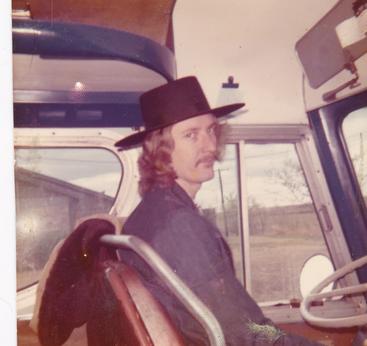 Snapshots of that group are shown below.   Click on a picture below to enlarge .

The music of Colossus was recorded live at various venues in the early seventies on a TEAC 4 track reel to reel tape deck with no one monitoring the recorder for balance or volume levels.  Please excuse the occasional blips, distortion and drop outs but these are the only live recordings available to Merlin Productions for this group.  The quality is sufficient to get a good idea how both groups sounded live back in the early seventies  if you are interested in listening.