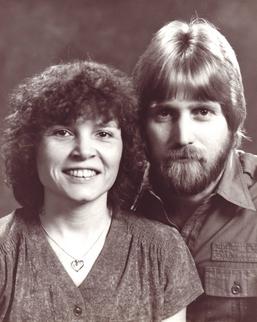 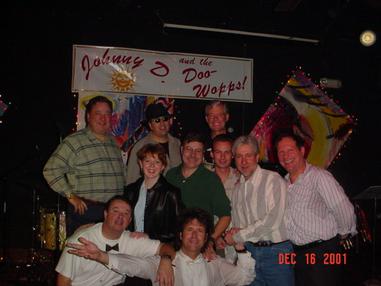 Merlin & Friends was started as a duo in 1996 with David Hughes on keyboards, guitar, trumpet & vocals and Chris Eigenman on drums & vocals.  Later Gary VanWaters was added on guitar & vocals.  The group played a variety of music including classic rock, rock & roll, pop, country and soul.  The venues were at parties, receptions, Senior Citizen dances, VFW Halls, Elks Clubs and American Legion Halls.

The Gentlemen 1993
A newer version of the sixties Gentlemen group with 3 of the original members (in underlined italics below).  When the band was ready to start playing gigs things fell apart and it never really got off the ground.
Left to right are James Miller, - saxophone, Bobby Albin -lead singer, Micky Morrow - bass guitar, David Hughes - trumpet,  guitar & vocals,  Chris Eigenman - drums & vocals,  and Gary Van Waters - guitar and vocals.

Kim Mottern Corliss is a singer/songwriter who lives in western Michigan.  She has also lived in Tennessee and wrote the song "Carter County" about the town she lived in.  While there Kim was a coordinator for the Nashville Songwriters Association International – Johnson City Workshop.  She also hosted a songwriters’ night in Bristol and in Elizabethton and made many trips to Nashville to play including the Bluebird Café. She has also played at festivals and venues in North Carolina and Virginia.  Linda VanWaters Tonini who became aware of Kim's talent and songs contacted David Hughes at Avalon Sound and set a recording session in motion. To make this record Kim mailed a cassette demo to David and the instrumental tracks were created by him on guitar & keyboards, Bobby King on Drums and Steve Lamb on steel guitar.  Then Kim flew to DFW from Florida where she lived at the time and recorded the vocal tracks.

GODADDY MUSIC PLAYERS MAY NOT WORK WITH WINDOWS 7

Johnny D and the Doo-Wopps is an Arlington based group that David Hughes provided and ran the sound system for at venues in the DFW area. The core group was made up of 2 lawyers, a commercial airline pilot, a pharmaceutical salesman and a music store owner/piano teacher.  They added the female singer and 3 horn players to get the sound of the 50's & 60's soul bands.  The guy at the front middle was a fan of the group.

REUNION
Coral Nuckols Hughes (now Southwell) on guitar & vocals and  David Hughes on guitar, bass, keyboards, trumpet , recorder & vocals.  The duo was formed in 1980 and performed at various night clubs, country clubs and parties in Texas before adding Gerard Bendiks on drums in 1981 for a tour through west Texas and a final booking at Captain Cook's Restaurant in Dallas, Tx.

Janet Alison Kollmeier is an accomplished vocalist from Dallas, Texas who has performed throughout the DFW metroplex and other music venues in the US.  She sang the beautiful lead  vocals on this 45 RPM single recorded at Avalon Sound Studio on the Stonehenge Label in the late nineteen eighties.  The song Hasta La Vista was written and co-produced by Coral Southwell, an accomplished singer/songwriter from Austin, TX and previously from Fort Worth, TX while involved with the operations of Avalon Sound Studio.  Boat Against the Current was written by Wyndi S. Harp, also an accomplished songwriter who is still active in the music scene in the Nashville, TN area.  She is currently writing music and singing in a Judds tribute duo as Naomi Judd.  Bobby King and David Hughes provided the instrumental tracks.         drh  2019